I have yet to meet him face to face but Raul Ramos y Sanchez has quickly become a friend of mine. A fellow Cuban, he’s always offered to help me in anyway possible.

That’s just what we do.

This friend has written America Libre, a story that is thought provoking as it is dramatic. It’s recently won the 2009 International Latino Book Award for best Adventure, Drama novel in English. Here’s the summary

Time: The second decade of the twenty-first century. As the immigration crisis
reaches the boiling point, once-peaceful Latino protests explode into
rioting.
Cities across the nation are in flames. Anglo vigilantes bent on
revenge launch
drive-by shootings in the barrios, wantonly killing young and
old. Exploiting
the turmoil, a congressional demagogue succeeds in passing
legislation that
transforms the nation’s teeming inner-city barrios into
walled-off Quarantine
Zones. In this chaotic landscape, Manolo Suarez is
struggling to provide for his
family. Under the spell of a beautiful Latina
radical, the former U.S. Army
Ranger eventually finds himself questioning
his loyalty to his wife—and his
country.

1) How did you get into writing?

I’ve worked as an advertising writer for most of the last two decades. So I’m sure some people would say I’ve been writing fiction for quite some time. In fairness, those more than 20 years in the ad biz gave me the time and resources to step away from the 9-to-5 grind and devote myself to work that meant more to me personally. In the end, one kind of fiction helped support the other.

2.) How did you come up with the premise for the book?

One of the first projects I began after my sabbatical from advertising was a public TV film called “Two Americas: The Legacy of our Hemisphere.” The film compares the political and racial traditions of the U.S. and Latin America and connected me with a fantastic team of international scholars. While working on the film, the idea for a fiction piece based on the same premise evolved. Once I began writing, the idea grew in a very different direction and AMERICA LIBRE was born.

3.) Tell us a bit about America Libre.

I like to think of AMERICA LIBRE as a romantic triangle in the middle of a revolution. My first goal was to write a compelling human story that would engage readers. In the process of that drama, I wanted readers discover some new perspectives about the Latino identity – and the dangers of ignorance and prejudice. To do that, I used the nightmare scenario of a Hispanic 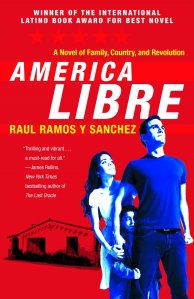 uprising on U.S. soil. I saw the potential for a future when a perfect storm of trends would collide: a violent anti-immigration backlash from supremacist groups, a fast-growing population of young Latinos, and a severe economic recession that made even menial jobs scarce. There’s one other volatile fact in this mix: No other immigrant group in U.S. history could lay ancestral claim to U.S. soil. If you look around the world, it’s easy to see how similar conditions have created ethnic conflicts all over the globe. I hope we in the U.S. are wise enough to avoid that fate. (“Wise” in the way Judge Sotomayor meant the word). I think a deeper understanding of our common humanity and a clearer picture of who Hispanics really are will help avoid the tragedy that I portray in AMERICA LIBRE.

In the minds of most mainstream Americans, being Cuban is not much different than being Mexican. Of course most people of Latin American origin know that’s a misconception. I wanted to address that mainstream stereotype in AMERICA LIBRE. People of Mexican origin represent roughly 80% of the Latino population in the United States. So I thought it would be logical to reflect that by having the central character be of Mexican descent. Still, the marked differences between Latin American nationalities become very clear as all Hispanics are forced to band together in the story. I don’t want to give away any plot points with specifics but those who have read the book will hopefully see how these differences emerge. By the way, I have a yet unpublished manuscript, THE SKINNY YEARS, that focuses on the Cuban immigrant experience. For those interested, you can find more on my website. (http://raulramos.com/A_Skinny%20Years_Raul_Ramos_Sanchez.htm)

5)The book was originally self-published. Why did you go down that route and tell us about your experience with self publishing?

The suggestion to self-publish came from my agent. She’d never recommended that option to any of her clients before. But given my marketing background, she thought I might generate enough interest to catch the attention of a major publisher. Her instincts turned out to be pretty sound. In the first five months after the self-pub edition of AMERICA LIBRE was released, I appeared on 14 radio and TV shows and held three book signings. Is self-publishing the right choice for every first-time author? I’m hesitant to say yes. I had a book with a very newsworthy premise, two decades of professional marketing experience and the time and resources to promote my book. While it’s very gratifying to see your work in print, self-publishing can be an enticing shortcut that may get you no farther in your career. I would weigh the decision to self-publish very carefully.

6. )You’ve got a two book deal with Grand Central – what will the second book be about?

AMERICA LIBRE is part of a trilogy. The entire story spans 15 years and two generations. The second book in the series has the working title EL NUEVO ALAMO. This book begins the day after the first book ends and continues the storyline, adding some new characters and developing some of the minor ones from AMERICA LIBRE into central figures in the second book. I don’t want to give away too much. But I wrote EL NUEVO ALAMO as a stand-alone book. It was a very challenging process which is still underway.

7.) What are some tips you would give to other writers out there?

Rewrite you work until you are sick of it. Then put it away for a while and rewrite it some more. When you show your work to an agent or publisher, expect edits … and learn to love them. These people are doing you a favor. Your friends and family will love your work. But professionals will tell you the truth—or their version of the truth, in any case. Don’t be discouraged by criticism and rejection. Learn from it. Use it as motivation to improve. And most of all, keep writing.

I still have the third book of the AMERICA LIBRE trilogy to finish. With the working title of PANCHO LAND, the book is already fully plotted out. I just need more time to put some meat on the bones. Right now, that time is scarce. Promoting AMERICA LIBRE has become a near full-time job. I’m not complaining. Just explaining.

And now for the giveaway. We have FOUR copies of America Libre to giveaway. And just because Raul is such a nice guy, he’ll sign one of them for us.

Here’s how to play:

Leave a comment in the comment section (make sure I know how to get in contact with you). We’ll place all the names in a box and pick them out. The final person picked gets the signed copy.

Thanks for reading along today and this week. It’s been a crazy week but a fun one. I’ve given away tons of stuff and of course we saved the fun stuff for last.

16 thoughts on “Q & A with Raul Ramos y Sanchez, Author of America Libre”