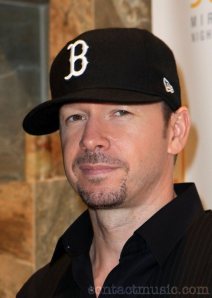 But before I tell you what “it” is, let me preference this by saying … this ain’t a post about writing.
I could find a writing link or somehow explain how “it” pertains to writing but I’m not gonna lie. Why lie?
So here’s the “it”.
I get to interview Donnie Wahlberg from New Kids on The Block tomorrow.
Yeah, I know. How am I able to keep still? Considering that I tweet this man daily and just adore him, how can I be calm enough to write this tweet. Well, blame it to the seven years of reporting — professional all the way ( and by the way tomorrow is also my seven year anniversary of being a newspaper reporter. Woot.)
I’ve been wanting to interview him since before I knew what interviewing was. Back when I was a little Blockhead (NKOTB fans are named as such) I wanted to either sing with them or ask them a bunch of questions. And now it’s happening. In the same week I interviewed another celebrity who I’ve wanted to ask a bunch of questions too — Jeff Goldblum. This is really one of my dreams come true. I wish, however, that I could get the full hour with him but, alas, in life you have to sometimes take what you can get. So I’m taking this and running with it.
How do I get to do this? Well, as we all know, I have a great relationship with the USA Network and I’ve gotten to interview some pretty cool people as well as help promote their awesome shows.
Donnie will be on In Plain Sight, 10/9 central March 31. The interview, or conference call, is really in relation to that.
So I get two questions — a main question and a follow up. I have one question, what should be the other one? In the comment section of this post please write what I should ask.
PLEASE keep it professional. This is, afterall, a professional interview and I do want to be invited back to others so I will NOT ask him the following:
Will you marry me?
Can I get a twug/hump/follow?
Such and such said (fill in the blank)
Can I get to tickets to any show?
When are we moving to Utah?
Is tonight going to be a new Back Rub?
I’m also going to ask another favor: Will those that he follows send him a DM on twitter to let him know I will be on the call. Because I only have such a short time with him, I want him to feel comfortable with me and to know that a BH is asking questions. On twitter I’m @writin2insanity
I’ll also be tweeting out the conference call as per usual. The BH version of my review of In Plain Sight will run here tomorrow. The show fan version will be on The Character Playground
Also don’t forget: The Character Playground and NK Airplay present: In Plain Sight Chat-Donnie edition. This will be a BH only chat during the show next week. Addresses will be coming soon.
Okay, go to it.