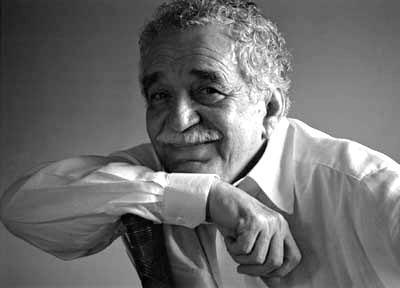 I was talking to a lady about my desk when the world heard of his passing.

“I’m not sure my couch would fit here with my desk. I’m a writer and I need my desk.”

I said that to the woman showing me the apartment. I am moving to a bigger place, in a bigger city, in a bigger state because my career just got bigger. I’m about to work at a university and advise students who will become amazing journalist. They will report and write and distribute the news in ways that we all haven’t even thought of yet.

My phone buzzed but it usually did with emails and texts and such. It’s the burden of being connected. It buzzed again. Even as I write this now, I don’t know why I didn’t check my phone.

Gabriel Garcia Marquez was for me a teacher. I write often on this blog about voice — how I lost it and how I gained it back. But I’ve never written about what I did to keep it, to make it grow in strength and in consistency. I mean, what are you supposed to do once you have a voice?

You’re supposed to use it.

Garcia Marquez said it was okay to use it…and often.

That’s because in my voice was me, all of me. Everything that makes me who I am and all the things I have yet to become. It’s okay if sometimes the voice goes back to childhood because I am that person. It’s perfectly fine if my voice is cold and cruel because sometimes I can be that way, too. This was who I was and it was okay to be this person.

While writers like Junot Diaz, Roberto Bolano, and Cristina Garcia helped me find my voice, Garcia Marquez made it okay to be more than one thing, fiction writer and journalist. After all, it’s the story that matters. It’s the story. Always the story.

That’s when I knew I was a storyteller, not a writer. Story drives me.

I read the messages on my phone.  I didn’t stop to react to his passing so I dismissed it as another news event.

It wasn’t until the next morning, in the quiet hours, before the world began to bark, that my heart understood the messages.

El maestro had passed. Garcia Marquez was no more physically but had crossed into a place where he was immortal, where he’d live forever in the stories he wrote. This is when I realized one fundamental thing, the last lesson he would teach me.

There is an indescribable hole in my soul since his passing, as if a family member in another country had passed on before I had a chance to know them, before my eyes memorized the contours of their face.  I feel his passing deeply, beyond the meaning of words, in a place where only other storytellers dwell. My bones ache with sadness and the world’s colors are duller. It will be a while before the luster returns.

It may sound silly, all this feeling for someone I’ve never met. We all pretend to know other artists through their work. For me, that’s not so. I got to know myself through his words, his imagery. His magic and was my realism. His magic nurtured my voice.

In recent years, I’ve had the great privilege of being compared to Gabo but not in the way you’d think. His mastery of story was not where the comparison was made but in the strength and clarity of voice.  At one time, that terrified me but now I know that was the legacy he left for me.

My other posts about Garcia Marquez

Other great Gabo stuff on the interwebs

One thought on “His magic was my realism”