Read Resentment part 3: Getting back on track

The next morning, I was surprised when a detective knocked on my door.

I buried my face in my hands, tears pooling in my palms.

“Mrs. Walker, what about a phone call?” The detective was a man, about in his mid-30’s, lean and fit with no wedding band. A short, blond buzz cut and the most adorable hard police stare. Had these been different circumstances, perhaps there could be some private investigative time arranged. C’est la vie.

I lifted my head and faced the handsome officer, teary-eyed and distraught.

She called me yesterday to yell at me, scream to the high heavens that she would never let Jim go. That if she couldn’t have him, no one else could.”

I ran to the table behind the couch and grabbed some tissues.

“How long had your husband been in this affair?”

“Five years. But I loved him so I stayed. We were happy despite it all. He had one woman for certain days and another for the other days.” I cried into my tissue and the officer stared at me for a moment. “He told me awhile ago that she was going to call it off with Monica. Said that he wanted to start fresh.”

The detective shifted in his seat. “I’m finding this difficult to believe. That you would stay knowing that your husband was involved with someone else.”

“Somehow it worked. It was such an odd relationship but it worked.”

He bit his lip before continuing. “What did you mean he wanted a fresh start?”

I started to sob uncontrollably, grasping to the top of the table. It was all I could do to not fall in a puddle on the floor. Once I could regain my composure, I opened the table’s drawer and a grabbed the pregnancy test I purchased earlier.

“This is what he meant,” I held up the plastic strip in one hand while the others clutched the tissues. The bright purple line was visible even from where the detective sat.

“I was just waiting up for him he never ca…”

That’s when the room went blank.

When I came to, that delightful detective was kneeling over me calling my name.

“Mrs. Walker, are you alright?”

“I’ll be fine. It’s the stress of this grave situation.”

He helped me up and I bit my tongue. How long does a widow wait before she can date again and is it bad form to hit on the detective investigating your husband’s murder?
The hunky detective led me to the couch and I sat there with my best damsel-in-distress look. He asked me more questions about Monica, if I’d met her, what did I know about her, and if I think she’d be capable of killing. 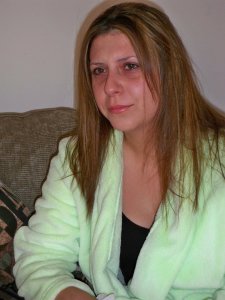 “I think, detective, that a woman is capable of anything if she’s pushed to her limit.”

“I think she was trapped in a corner and had to do something.”
He smirked and nodded, agreeing with my assessment.

“She said the same about you. Said that you wanted your husband dead. That you contacted her, recruited her in your plan, came over, and you cooked a poisonous meal for him.”

“You’ve got to be kidding?” I gasped. Poor, sweet little Monica must have been desperate. “Why would I do that? That’s absurd!”

“You have nothing to worry about Mrs. Walker, her story doesn’t check out. We pulled the phone records and we saw the call she placed to you. Our forensics guys found flakes of poisonous plants on her kitchen floor. We found a P.O. Box under her name where the plants were delivered to. We even found the pots she used to cook

the meal with in the dumpster. If that meal was poisoned, she’s looking at murder one.”

“That bitch!” I cried. “She wanted to make me suffer! And she has, because she took Jim from me.”

The detective rose and I escorted him to the door. As he stepped through the entry way, I asked him one final question.

“The preliminary report says it was Tylenol poisoning. There was enough in his drink to cure the two dozen headaches. When he didn’t eat the poison she must have slipped him some in desperation.”

As the detective walked off and I closed the door.

I never saw what my husband saw in his mistress. Sure she was abundantly gifted in the womanly parts, but using her as an accomplice gave me such a headache. Lucky for me I had some Tylenol handy.

4 thoughts on “Resentment Part 4: Fake it ’til you make it”