Nearly a week. That’s how long it took me to sit down and watch the eighth and final season premiere of Monk.

I was excited when I received my review copies of Psych and Monk and looked forward to being one of the first in my circle to see it before everyone else did.

But as the opening scenes of Monk came up on my screen, an overwhelming sadness came over me. It was like that first day of senior year in high school–you’re happy that it’s here but sad that it’s over.

So there I was, watching the beginning of the end of Monk, it’s senior year, and wishing that time would stop.

It doesn’t unfortunately and neither does this review. So let’s start with the obvious. With this being the final premiere I was expecting something a bit conventional, safe, still Monkish but something that didn’t have to try very hard. After all, it’s the final season and who can blame them for coasting?

Thankfully, they’ve decided to start the season with a bang and give fans a proper good-bye. And it looks like from this episode they’re going to follow the Lay’s potato chip philosophy of storytelling, you can’t just stop at just one. 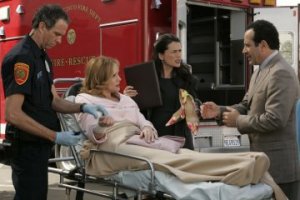 Former detective Adrian Monk (Tony Shalhoub ) becomes involved in an attempted murder case after someone sends threatening messages and blows up the car of his favorite child actress (Elizabeth Perkins), from his favorite television show (which is ironically similar to the Brady Bunch) who wrote a tell-all book. The case takes an interesting twist when Monk is asked to be her bodyguard.

I can tell you more but then I’d have to kill you…or at least injure you or shower you with boxes full of wipes.

There is no doubt Shalhoub knows his character well. What’s delightful about that is that you can place him in any situation and the Monk-ism come out without hesitation. Watching Shalhoub’s Monk go into total fan mode, complete with the super-precise fan trivia questions, has to be one of the funniest moments of the series. It’s a shade of Monk we haven’t seen before but always knew it was there.

Shalhoub’s performance in this episode and well as the writer’s efforts, stretch Monk further than we’ve seen before. He’s still our favorite defective detective but the show’s camp is placing one foot over the cliff while the other is planted firmly on the other side. The push is not obtrusive. It’s a treat and as a fan, I’m glad they’re dangling their toes over the edge. But it’s also something that would have been out of character as early as last season. This episode couldn’t be in any other season than this one.

Let’s talk about the writing now. It’s smart, more so than usual. There were a couple of lines that I didn’t see coming that made me laugh out loud. After seeing the show for awhile, I could see the punch lines coming. Now they hit you out of left field. The comedic timing seems tighter than usual. While some lines resulted in jokes, others had double meaning, especially for fans. For example, when Monk talks about his favorite actress in the TV show he says “In a way, I watched her grow up.”

In a way we watched Monk grow up. From the days of Sharona, through Detective Disher’s music video, and even through the Captain’s divorce and the introduction of Natalie, we were there through all of it. Monk is to the USA Network like Emeril is to the Food Network or Sesame Street is to PBS, beloved and like the cool cousin you wished would visit more. The show proved that good television could be found on cable and that anyone, despite the long list of phobias, can be a hero.

What to expect:
A bit of sadness (on the viewers part)
Monk trying to figure out why a woman would have a mirror on the ceiling. (And it is the reason you’re thinking)
Monk wanting some tea, but NOT to drink it
Natalie eating paper, but she wasn’t hungry
Two words — Afro and Bell bottoms. Outta sight!
A new way to do a wrap up that hasn’t been done before
Disher being Disher
Natalie kicking butt

4 thoughts on “Review: Monk running toward the finish line”

Dear Reader,
Welcome to my website! My name is Icess and I'm a writer, professor, and reader. This website is about my writing life both on and off the page. Hope you enjoy your visit!