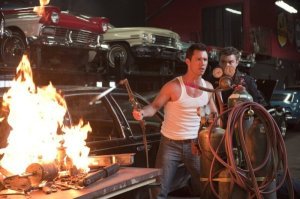 Michael, Michael, Michael. It seems like our favorite burned spy just can’t stop making friends with guns.
And THAT’S all the hint I’m giving you about an advancing plot line that will blow your mind. The ultimate in Michael’s cat and mouse relationships.
Burn Notice begins the second half of season three tonight at 10/9 p.m. central on USA Network. The first episode back is explosive and makes your jaw drop but I’m getting ahead of myself. Let me set this up better.
If you remember the beginning of season 3, management cut Michael Westin loose and he has fended for himself all season while desperately trying to climb back into his old job.
Then he made a decision…Fiona or his old life. He chose Fiona. Now, he has to deal with that decision.
That decision is being explored in tonight’s episode. Getting Michael back into covert ops has been put to a stop. Someone is in town cleaning up the mess left after Michael shot and killed his contact.
Now someone is after Michael. Who? Who knows but he has a sense of humor and is as mythical as Michael Westin himself. More on him in a bit.
But before that person could be found, it’s business as usual. There is a client. They need help. Michael, Fiona, and Sam to the rescue.
This job though, which is bringing down a family of insurance frauders, is different. Maddy is asked to take a role in the operation by getting some information that the trio wouldn’t be able to get — files from the local county office. It’s through this role, she learns a bit about Michael’s life while he was away. She doesn’t like. He doesn’t either but has dealt with it. Maddy has a harder time of it. Really hard.
Okay so let’s talk about the characters. There is gonna be a change, probably a slight shift of Maddy and Michael. Maddy has now gotten a taste of her son’s life. Viewers will see something click in Maddy, as if she’s finally seeing Michael for the first time. After years of wanting to know what Michael did while he was away, her first taste was bitter. The question is what will she do with this information? What will the writers do with this? Is Maddy going to continue asking about those missing years or is she going to accept that her son is tougher than she can ever give him credit for.
Michael now has no agency, is without the people who burned him, and has a bounty on his head. Is old life is now further a way that it has ever been so what is the next step? Finding the person who is trying to kill him.
But that’s easier said than done. This person, who could have easily killed Michael, is engaging him in a game of cat and mouse. Forget the rest of the villains from Burn Notice. This one scares me the most. He’s more controlling than Carla and more diabolical than Brennen.
Ladies and gentlemen, this is going to get real hot, real fast. Get ready.
What to look for:
A Cagney and Lacey reunion
A telling 2-3 minutes
Fiona showing Michael who’s boss
Sam nursing a beer
Michael’s slipping on a cover ID like no ones business

Dear Reader,
Welcome to my website! My name is Icess and I'm a writer, professor, and reader. This website is about my writing life both on and off the page. Hope you enjoy your visit!