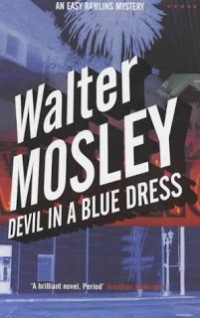 Walter Mosley’s Devil In a Blue Dress was my first book this semester and I’m so thankful for that.  He’s the perfect mix of literary and genre.  He believes in the heat of writing. Write what is passionate and true but he’s also about the production side and advises to write an hour and a half every day.

I don’t know about an hour and a half every day but I do believe in the daily practice of writing but that’s not what this post is about. I’ll write about daily writing habits later.

This post is about fear. Writing is a scary business and Mosley addresses that in an interview with NPR in 2007. Stop Reading and Start Writing : NPR He was promoting his book “This Year You Write Your Novel.”  In the interview he says that writers are afraid of writing. The more and more you write the more real material starts to bubble up. By real he means from the unconscious, the stuff you push down to function (yes, the correct word here is function). When that starts to bubble up, it’s frightening.

Writers also write what they know. It’s an old adage, I know but if what they know is tied to the people around them–mothers, fathers, friends, co-workers, bosses, cat, etc–that also tends to come out in the writing.

I had a friend of mine tell me I needed to leave a city because it upset me so and that it would come out in my writing.  However, that is one of the most productive periods of my life. What came out on the page was experimental dribble that to this day I love because it wasn’t what I expected.

Those surprises for a writer makes for some interesting self awareness and fuel for self discovery. Who are we really? Not even our mothers know us and we hardly know ourselves. The way to find it is through art. For some, it’s on the page after daily reflection and work. Some it’s in a song. Others it’s through painting or sculpture.

So being a writer is more than just sitting down and putting pretty words on the screen. It’s about exorcising demons you didn’t know were there and finding the truth of their existence. Why are you writing about your mother? Why does that character ironically look a lot like your boss? And why is your favorite paragraph about  planting flowers? Who are you? Find out. Pick up the pen. Keep writing until it hurts. For Mosley it takes an hour and a half a day to figure it out. For me…well I don’t know yet. I haven’t hit the truth but I know it’s on its way.