Editor’s Note: This post was written with an iPad app.

On this ride to Chicago, I am lucky enough to have my short story with me to work on.

It’s something I’ve been working on for a bit, since before graduation. And just like with new pieces, it’s a bit like a weed. It’s unruly. It doesn’t know what it wants to be yet but it knows it doesn’t want to be what I want it to be.

One of the things I’m having problems with is the setting. It feels like a historical piece, set in the south in the 40s.

That’s pretty easy if you live in Shreveport, LA considering very few things have changed since then but what about the setting reflects my character?

And there is where the journey began for me. How is my main character like the setting? How did it reflect her and her story? And, how will it change when she changes.

Then I thought about how African Americans would take trips north to start a new life when the old one had….overwhelming difficulties. They would take those trips on trains, like the one I’m riding now.

What would make someone run? A mistake. A big one. And bam! The story opened up in a different way. It was finally telling me what it want to be, what the arc was, and the ending. I call this “talking ghosts” when characters literally tell you their story.

I love it when that happens. And this couldn’t have happened without a simple train ride looking at scenes like this: 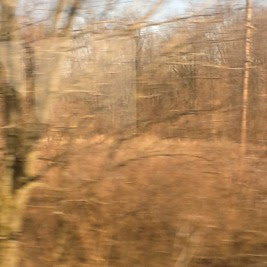 One thought on “From the road: Settling on the setting”