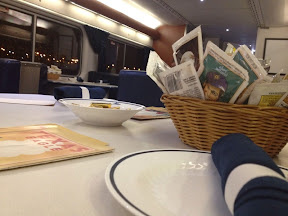 Tonight, I wanted what could be the final meal of my train trip to be great. Taking the train from Longview to Chicago and then back again for the AWP convention was fantastic. Except for losing a post for this blog, everything went without a hitch so to celebrate, I treated myself to a dinner in the dinning car.

That was probably the best decision I made this entire trip.

When I was seated (for dinner you can only make a reservation) I was alone, with all the other booths filled with people already having dinner conversations. Then, shortly after ordering my Mountain Dew, a woman and her mother slipped into the seat in front of me. The daughter was in her early 40s and the mom was elderly. Both African American women were beautiful. The daughter, at points, took the role of caretaker with the the mom and helped her order her meal. She was confident, an Atlas without the struggle. Her mother had the glow of warmth and was very approachable.

They both looked like they had a story to tell and I was ready to listen.

During dinner, the daughter and I learned how, in a Kevin Beacon six degree of separation way, we knew some of the same people and graduated from the same university (me undergrad and her masters) and were in a similar discipline. As they talked and, most especially when they interacted with each other, I realized that the story they had to tell was what I was already writing. The mother was an older version of a character in the current short (maybe) story I was writing. This is who Lola becomes.

I was having dinner with my character and her daughter and it was all I could do to rip my computer open and start writing.

Instead I watched them, heard them talk, observed their interaction. Then I listened to my creative brain fill me in on the rest of my story. Who’s daughter was that? When did Lola have it? What did her mother say? How did it change her life?

Those answers came to me and all because of a dinner conversation. I can’t tell you how awesome I’m feeling right now!

Don’t you love it when the ghosts talk? A very fruitful train ride, indeed. 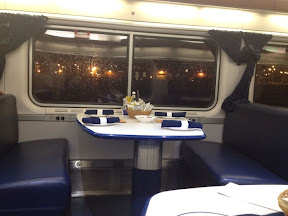 2 thoughts on “From the road: Having a dinner conversation with your characters”