NOTE: A version of this blog post was written as a column for The Times of Shreveport.

After two huge national stories this week, my brain was liquid.

See, I’m more plugged in than the average person. Aside from working in a newsroom, I’m also the social media person for my newspaper. That means I am in charge of not only giving people the news but making them talk about it on social media, Facebook mostly, which means I had to be plugged in.
By plugged in I mean REALLY plugged-in. I have two cell phones (work and personal), an iPad, and a laptop, all of them going and all of them set up to alert me of every little thing.

After this week, I needed a break. A break, break. The kind where you call your boyfriend over the phone or take him to lunch in a public place and break the news gently.
“You’re smothering me. We need to go on a break.”

Not sure how my boyfriend, Social Media, took it but for me, it was difficult to live without him.

Let’s start at the beginning, when I got this ingenious idea to go on a break. It was before this week’s epic news cycle. I heard about this thing called Analogue Sunday a while back. The goal was to take one day our of the week and rough it, 1982 style. No cell phone, TV  Internet, nada. Just you and your thoughts to entertain you.  This was intriguing and I never really committed to it until now.
On Friday night, after the suspect Boston bomber was captured, I said no more. I’m done. Analogue it is.
So the adventure then started Saturday. I slept in and pulled out my typewriter. Yes, I own one. It’s awesome but it needed ribbon. Typewriter ribbon. Who in blazes still sells this stuff? Here I had a story rattling in my head and I needed ribbon.
How did Hemingway and Fitzgerald write without typewriter ribbon? On the other side of coin, how was I going to write without my laptop?  Was this insane? Yes, it was but I wasn’t going to call off my analogue day without a fight. I’d figure out how to get that ribbon or figure something else out.
A Facebook buddy suggested Office Depot. Bless their hearts they had some, however, not the ribbon I needed. That would have to be ordered through their website. 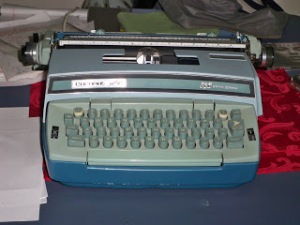 You’ve got to be kidding me.
“You can go to the yellow pages and see if any of the non chain office supplies has what you need,” the red-shirted Office Depot “associate” said after speaking with his manager.
No, he wasn’t kidding me.
Rolling my eyes, I drove to my next destination, a symposium at the local arts council on zombies, vampires, and essentially everything cool you can talk about on a Saturday afternoon.
This is when I missed my boyfriend the most. While everyone was waiting in between speakers, they texted and Facebooked and Tweeted. I sat there, looking around. I felt naked not being able to check in or Tweet some snarky comment or share a picture of this crazy alien wall art that was freaking me out.  It was as if my fingers were cut off and my tongue was tied with rubber bands.  Communication for me was difficult, more than I wanted to admit.  However, it became painfully obvious after the symposium ended how my ability to start and engage in conversation had gone to near extinction levels. I wanted to congratulate the presenters on an excellent job, but I felt awkward and timid. I was the social Bambi learning about to relate to people again.
Disappointed in myself, I left. Had social media taken so much of my life that I could no longer interact with people unless it was liking a comment or picture? How did this happen? When did this happen? I took out my phone when I got to the car. Without touching a button (so I wouldn’t see the alerts on my phone), I thought about how a device, which was originally conceived to make our communicating easier, was in reality destroying it, conversation by conversation. I no longer needed to have long conversations with my friends, they follow me on Facebook and Twitter. They know what I had for lunch and how happy I am (or not) at any given moment. The mystery of life’s little moments are given away in pictures and quotes. Memes do all my opinionating. I not longer laugh, I LOL. The art of conversation had become as difficult for me as it is for an infant.
Writing. How has this impacted my writing? I wanted to find out in my little experiment whether my writing went the way my conversation skills had. Already failing to find ribbon for my typewriter,  I drove to Target to take it back to the old school, as the kids say. If I couldn’t use my typewriter, I could use paper and pen. But even this proved to be trying.
I didn’t own paper at home. Printer paper, yes, but not sheets of notebook paper. It took me ten minutes to weigh my paper options — legal pad, spiral notebooks, steno pad, composition notebook. Then another 15 to consider gel ink and ball point pens — gel writes better and ball point doesn’t smudge. Then another 10 to consider capped vs click pens. And yes, the blue vs black vs another color self-conversation was epic.
Having barely been able to make a decision on paper type, the ink pen decision was too much. I was exhausted from it.  I walked away a bit ashamed about the entire experience. I remember a time I’d spend an hour in the stationary aisle admiring the pens, knowing which ones I liked the best. Now, I couldn’t decide. It was a complete brain block.
However, the writing part wasn’t as bad as the experience of it all. I could still sit and write something, silencing my inner editor, though I couldn’t write as fast as I type. As I was writing this story (a noir-inspired tale) I felt more connected to the prose. Though I already know that once I transfer it over into my laptop I’ll revise, I am a bit pleased with the first draft of it, or what I like to call the “bones.”
So after 12 hours of my experiement, I decided to finally look at Facebook and Twitter. There were more than 20 notices waiting for me. Yes, my boyfriend Social Media was smothering me. But I wasn’t ready to cut him lose. I recognize it’s impact and its purpose. Since I have friends scattered everywhere, I like being able to see what they’re up to even if it is a picture of what they had for breakfast. I like that people who don’t know me follow me on Twitter and they get to know me by the Tweets I write. However, this experiment did teach that despite all the good, there were other things I didn’t want to lose touch with. I want to still have conversations and look people in the eye when I do. Reading a newspaper, a NEWSPAPER, is still pleasurable for me. While  during the week, I have to be connected to every news push notification, on the weekends I want to get the full story from my morning paper, not my iPhone or computer screen.
This experiment has showed me that it is time for social media and I to set up some boundaries.
So would I do this analogue day? Heck yes! I learned so much of myself and what I’d like to change. There needs to be time for more conversation. Reading should happen in paper form because sometimes convenience is just laziness.