This is your tape.

I started watching the first season of 13 Reasons Why last year after my students told me how good it was. They told me the basic premise, and I was, of course, intrigued.

It was a great series. Not good but great.

The scene when Hannah takes her life. She fills the bathtub. She slits her wrists. She lays in wait. Her mother finds her too late.

That scene was brutal. Unapologetic.

It seems that mental illness, specifically depression and anxiety, is in media nowadays. One of my favorite shows, One Day at a Time, also dealt with it. When the main character decides that it’s time to get off the drugs that help her cope with her PTSD and to stop going to therapy, the wheels fall off of her life.

Her mother, as Cuban as rum and sugar, at first says good. The we’re-Cuban-we-don’t-need-anything-to-cope-narrative-comes-into-play. But when she sees her daughter without her coping mechanisms, she understands. 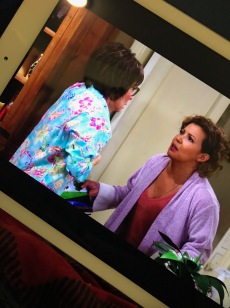 And I think that’s the difference between these two show and how they portray depression and the consequences of that. While 13 Reasons gives you the brutality of depression (in response to how people treat each other), One Day at a Time suggests it, makes it very clear where the character could go if she continues off her meds and without therapy.

I was a puddle at Hannah’s death in 13 Reasons. I shook from my heels to my hair root. I was at that place again, a place I have worked hard to leave. I was not and am not interested in revisiting my trauma, even if it’s just for entertainment. Especially if it’s for entertainment.

So no, I won’t be watching. Not because it’s not good but because I love myself more than I want entertainment.