I wasn’t quiet sure if I knew what I was doing. When I pitched the sexy Ramen Noodle story, I thought this would be a fun assignment. But when I had to do some research and put together a recipe, well that was interesting. Putting together my own recipe wasn’t a requirement but how was I supposed to write about different ways to cook something, you have to come correct.

So, I decided on a stir fry because, well, who doesn’t want to cook something in a big pan.

What turned out was some awesome deliciousness!

Before it’s in the paper, here’s the recipe I worked on. There are two others I’ll be giving out in my article, which is scheduled to run mid-August. Those two you’ll have to read at Shreveporttimes.com

One pack of chicken tenderloins in strips

Two packets of Ramen Noodles (without the spice packet)

One of side of a green bell pepper

One stalk of celery

Cut the chicken into bite size slices and place in a bowl. Marinate with teriyaki sauce over night.

Cook Ramen Noodles (without packet) in a pot until al dente. Drain the water and toss with oil so it doesn’t stick. Place it to the side.

Pour some sesame seed oil (about once around the wok) and heat. When it begins to smoke, use tongs to place the chicken pieces into the oil.  Cook the chicken through then set it aside in a separate bowl.  Heat the broccoli until it’s soft. Set it aside in the same bowl as the chicken. Place the onions, green peppers, celery in the wok. Splash a bit of soy sauce and cook through until the onion is translucent. Place it in the bowl.

Now, pour the noodles in the wok and splash with soy sauce. Toss and brown the noodles until they are brown and delicious-looking. Next pour all the other ingredient from the bowl –chicken et al — into the wok and toss, warming all of it together. Just when it’s about done, toss in the handful of snow peas and cook through for about two minutes.  Take off the heat and plate up. Enjoy.

Here’s how the cooking went. 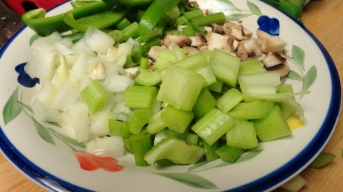 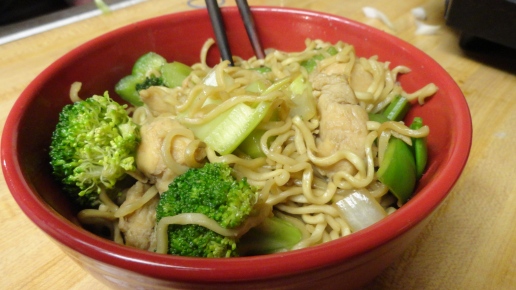 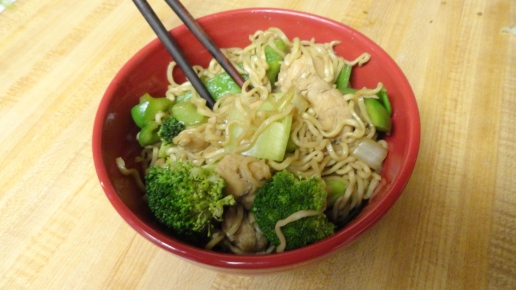 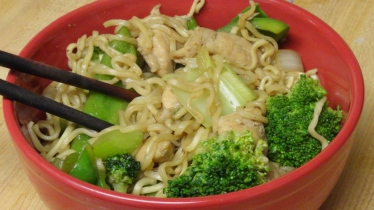 One thought on “On Assignment: How I made Ramen Noodles sexy”